Super Bien Dong boats are equipped with many modern machines. With the outer shell is an Italian-made aluminum alloy, and the machinery and equipment are imported from Japan. On the boat is full of safety equipment for tourists when there is a bad case.

Stemming from the desire to change the old boats, which is the only means of transporting passengers in and out of Ly Son Island, East Sea Transport Services and Construction Co., Ltd. has determined to invest in building two new modern boats, including:

Super East Sea boats is one of the turning points in traffic from the mainland to Ly Son Island. The boat was built with a value of up to 1.2 million and launched on December 22, 2018. This is the most modern vessel by international standards and the largest amount of investment in the passenger ships to Ly Son Island. Super East Sea boat s considered one of the modern speedboats which suitable for Ly Son tourism. The boat eaches speeds up to 30 nautical miles. Therefore, with a distance of 15 nautical miles from Sa Ky to Ly Son island, tourists only take 30 minutes to travel. The boat has 139 seats that are firm and comfortable before fast surfing. 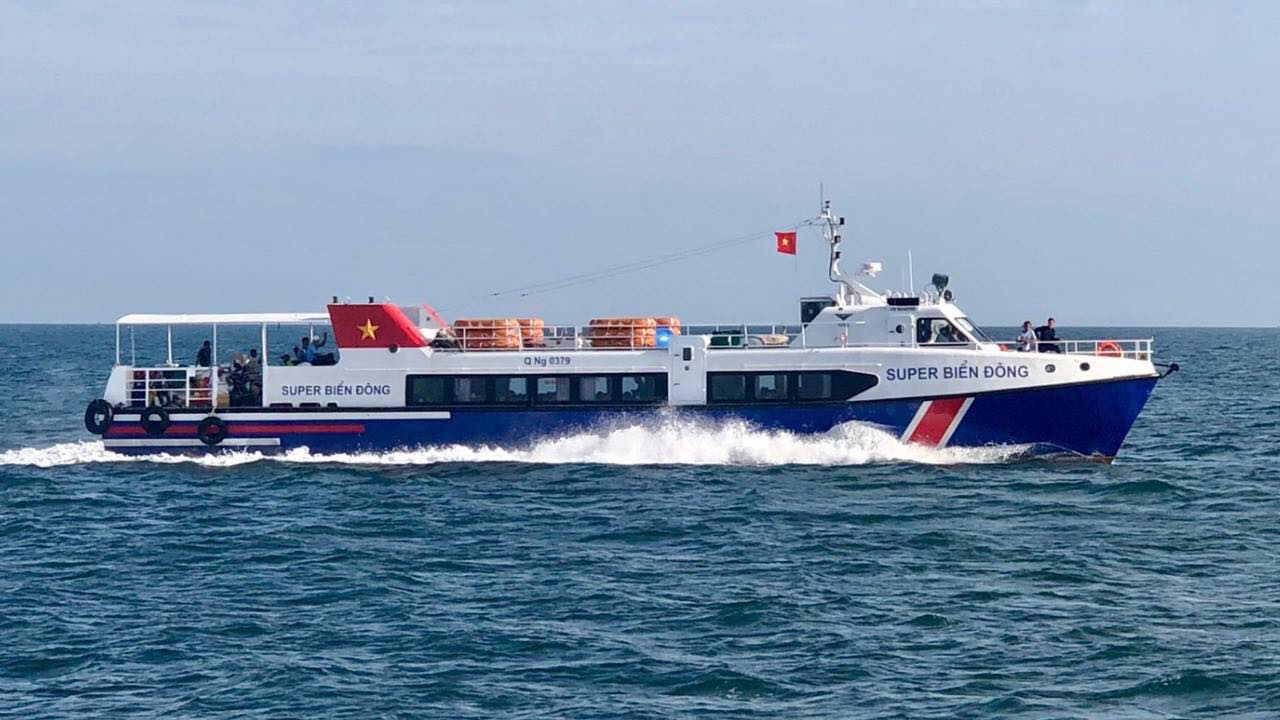 Super East Sea 2 is the newest, most modern boat and the largest investment amount in the fleet in Ly Son. The ship is built of aluminum alloy, the main engine is imported from the US, the capacity of two engines is 2.6 thousand HP. Travel speed of the ship reaches 35 nautical miles / hour.

With the introduction of the Super East Sea 2 boat into operation, the travel time from Sa Ky port to Ly Son island from over 1 hour is now only 30 minutes.

The boat has a total of 150 seats and is equipped with international safety standards of navigation. The total investment in building newly Super East Sea 2 boat is 1.2 million USD.

Fares include VAT and Passenger Insurance!

Ly Son is an island in Quang Ngai province. Ly Son Island is located 30 nautical miles from the mainland to the East, you can board a boat to Ly Son Island at Sa Ky port, Quang Ngai.

Ly Son has 2 main islands, Big Island and Small Island (collectively referred to as Ly Son Island) is place where boats from Sa Ky port (Quang Ngai) will dock at Ly Son port. There are 2 villages here: East village, West village. At Be Island, you can bathe and snorkel and watch the corals overnight at the homestay on Be Island. April, May are the peak tourist season here because of the beautiful weather, convenient for diving and watching coral. This means that you have to book boat ticket about a week in advance if you want to go during the peak season.

Option 1: Buy boat ticket directly at Sa Ky port, you move to Sa Ky port, go to the SUPER EAST SEA ticket office and buy ticket. Note: As a rule, 1 person can line up to buy 02 tickets. To buy tickets, there must be ID card or passport of the buyer and the person being bought for it. Tickets are on sale starting at 6am, 07h30 the boat will depart.

Option 2: Buy train tickets online on Super Bien Dong’s website – https://superbiendong.com.vn/, this is the fastest way, you will save time waiting in line when arriving at Sa Ky port, and book in advance to travel to Ly Son island. With only 2 minutes, you can book boat tickets for your family and friends to visit and travel to Ly Son island. With the strong growth in online ticket sales, we hope to sell boat tickets to a lot of far away tourists so that everyone will not run out of tickets.