Ong Doc river fast ferry pier, Song Doc town is under the management of Song Doc Border Guard, Ca Mau Border Guard. Therefore, when starting to operate the Ca Mau – Nam Du – Phu Quocfast ferry line, the Border Guard force will support the Company to do well the administrative procedures, creating favorable conditions and ventilation to ensure the time for in and out of ships, but still ensure the regulations and professional measures of the border guards.

From Ca Mau city bus station to Song Doc fast ferry pier ran Van Thoi district about 50km, passengers take about 1 hour 30 minutes to get there by bus / passenger car. And about 1 hour by taxi for about 400,000 VND / time.

The fare for each bus ride from Song Doc to Ca Mau is 21,000 VND. It is very convenient for passengers going from Ho Chi Minh City take the latest trip at 23:00 to Ca Mau bus station, at 5 am to catch the bus going back to Song Doc.

From Ca Mau City to Song Doc is a relatively small distance, most of the buses operating are 29 seats to transport passengers to the pier. Due to the newly opened Song Doc – Nam Du – Phu Quoc fast ferry line, he number of passengers has not yet evaluated the potential, so using the current Song Doc pier for a while, after a large number of passengers will switch to the opposite pier (Southern of Song Doc) to welcome all kinds of vehicles.

Passengers wishing to transit from Ca Mau to Song Doc can take line’s car at 6:30 a.m every day with a fare of 45,000 VND / person. Right after booking this route, the consultant will transfer passenger information to the vehicle operator to assist.

20km from the center of Tran Van Thoi district, Song Doc Town has 8km long coastline, an area of ​​3,349ha, with a population of over 50,675 people; there are 13 clusters, 1 island (Hon Chuoi), 18 nautical miles from the mainland. The town has 25 agencies, companies and factories located in the area. Because the economy is mainly farming, fishing, services and commerce, Song Ong Doc passenger port is also one of the main piers of the town.

Ong Doc River originates from the Cai Tau – Trem River junction, flows to the West, passing many villages that have been permanently settled: Xom So, Can Du, Noon Ke, Ong Tu, Tham Troi … and poured into Ong Doc’s door on the Gulf of Thailand side. On the right bank and left bank there are many small rivers and canals: Cai Tau, Rach Gieng, Rach Cui, Rach Rang, Rach Vop …

This river formerly known as Khoa Giang, has witnessed many historical events of the Ca Mau region from the first period of exploitation to the two resistance wars against the French and the Americans.

The name of Ong Doc River comes from the legend, during the time of being chased by Tan Son army, Nguyen Anh and his entourage fled to the South, and went to many places in Ca Mau. One day, she escaped to Cai Tau village (now in Khanh An commune), then planned to follow this river to Hon Tho Chu (outside the Gulf of Thailand) to Siam to ask for help. Unexpectedly, the boat had just left for a while from Rach Cui, the Tay Son army chased.

While hanging his hair, Marine Admiral Nguyen Van Vang was in the entourage, so he asked the king to take off the royal family for him to wear to stay in order to obstruct and distract the enemy. Thanks to that, Nguyen Anh escaped ashore and escaped to Khanh Binh forest. Meanwhile, Admiral Vang was killed by Tay Son troops and drowned in a deep river. The Tay Son army thought that Nguyen Anh had been killed, so he stopped chasing. Because of that, Nguyen Anh immediately changed his route, returned to Ong Tu canal (in Phong Lac commune), then marched across the Cai Ran canal and stationed there to reinforce his forces to find a way to escape. . Today in the Cai Ran area, there is still a relic of a barracks foundation and a historic pond, called King Pond.

Admired by the Admiral Vang ‘s saving sacrifice, the people here call this river the Doc Vang river to commemorate the faithful Admiral of the Marines. Gradually, the name Ong Doc river became familiar to Ca Mau people, sometimes it was called Song Doc for short.

In 1954, Ong Doc river witnessed the historic separation of the people, cadres and soldiers who were children of Ca Mau and the South gathered to the North. After the Geneva Agreement was signed, our country was temporarily divided into two regions. Ong Doc estuary is one of the major gathering points in the South. And in the last trains, comrade Le Duan and comrade Le Duc Tho were seen on the ship to gather.

Few people know that comrade Le Duan stepped onto the ship just to distract the enemy. After the ship departed from Song Doc pier, comrade Le Duan was secretly brought back to lead the Southern Revolution in the early years of the resistance war against the US.

Song Doc is also used to place for Song Doc market, Song Doc town (the town of Tran Van Thoi district). This place is crowded with population, busy trading with many typical business lines of a coastal town, with customs, living habits, folk beliefs creating an own cultural space of the seas.

Especially, there is also Ca Ong Mausoleum “Nam Hai Great General ” in cluster 2, Song Doc town. On the 14th, 15th, and 16th of the second lunar month every year, Nghinh Ong Song Doc Festival, which is the largest folk festival in Ca Mau, attracts tens of thousands of people in the province and surrounding areas. Even fishermen from the central and southern coastal provinces also come to worship, pray for good weather, calm sea. 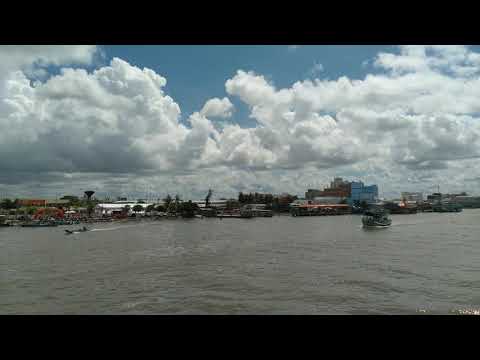